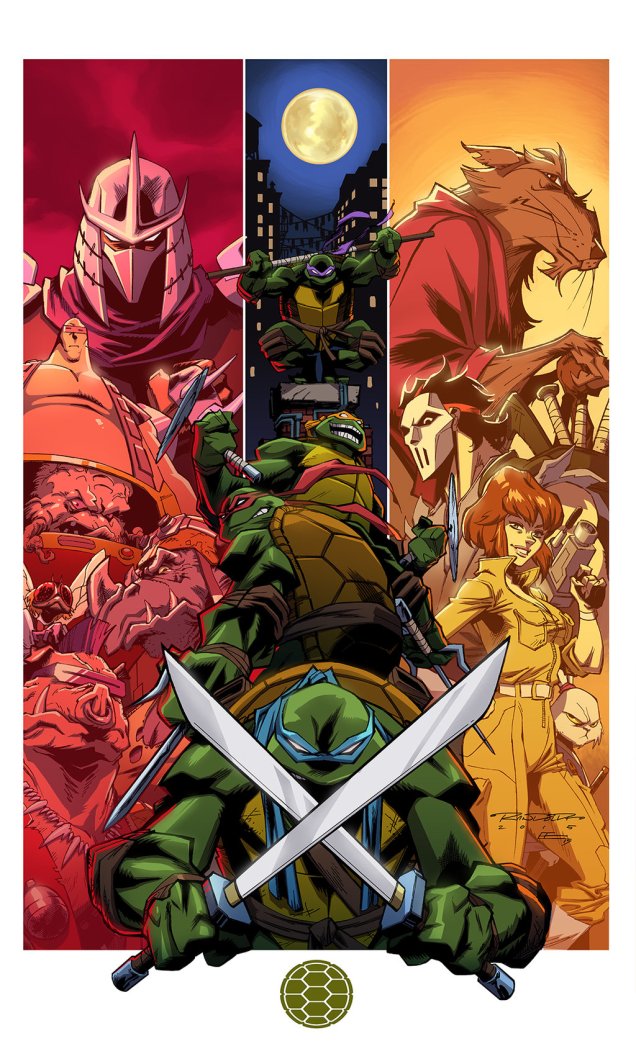 I have a big soft spot for the Teenage Mutant Ninja Turtles (TMNT). I grew up watching the old 1987 Fred Wolf cartoon (“Heroes in a half shell! Turtle power!”), and fell back in love watching the 2003 4Kids! cartoon. I’ll defend the 1990 Golden Harvest film as a cinematic gem until the day I die.

For years, I have been thinking about how I’d go about running a Teenage Mutant Ninja Turtles roleplaying game. I’m probably never going to run a Teenage Mutant Ninja Turtles campaign, since I only run games in person and I don’t know many roleplayers who are fans of TMNT. But that’s never stopped me from thinking about it and now, finally, I know how I’d go about setting up such a game.

In this series of blog posts I’m going to set out the process by which I would adapt TMNT to a roleplaying game. In this introductory post, I discuss game mechanics and explain why, for a shorter campaign featuring the four turtles as PCs, my prefered system is The Three Rocketeers, an aspects-only variant of Fate Core. In later posts, I’ll present character sheets for the turtles (part 2), lay out at one-shot adventure and stat up some major antagonists as NPCs (part 3), and talk about how I’d set up a longer campaign as a GM (part 4).

I hope that any GMs and players who are interested in a TMNT game will be able to follow what I’ve done and use it to play something that kicks ass. (And if any of my roleplaying friends want to play such a game, please let me know so we can make it happen!)

Why The Three Rocketeers?

TMNT is not a complicated franchise to adapt to a roleplaying game. Any system with high-flying, butt-kicking action scenes will work.

However, I want to run a game using the four turtles as the player characters, and as such I want a system that showcases the differences between the characters. The TMNT are some of the most iconic characters in popular culture, but in many roleplaying games they would be mechanically almost identical. They mostly have the same skills (they fight, they sneak), and they are too cohesive a unit for traits based on values or relationships to be meaningfully distinct (they argue sometimes, but when they fight they fight as one). Their differences are in their personalities, their weapons, and their approaches to solving problems.

Fate’s aspects are the perfect way to give mechanical weight to nebulous differences like personality, and for a long time I considered using Fate Accelerated Edition (FAE). I had been in an FAE game based on The Three Musketeers (I was Porthos), and I loved the way it kept the action light and pulpy, focused on the characters’ personalities and styles, and brought them to larger-than-life. There are so many similarities between the Musketeers and the TMNT that any game system that would work for one will almost certainly work for the other.

FAE uses Approaches instead of Skills, and they seemed promising when applied to TMNT. Leonardo is Careful, Donatello is Clever, Raphael is Forceful and Michelangelo is Flashy. I ran into trouble with the Sneaky approach, though. In a game about ninjas, you’d think Sneaky would make sense, but it kinda doesn’t for TMNT. Although the ninja characters can all vanish into the shadows when they need to, and although the TMNT must often remain hidden, sneakiness in a wider sense is rarely a part of a TMNT scene. The TMNT rarely use outright deception in either a fight or a social situation, and the only reason anybody ever fails to be stealthy is when accepting a compel on some other issue, so nobody would ever need to make a roll for sneakiness. I could remove the Sneaky approach, and maybe the Quick approach as well to give each character a single column of traits (+3, +2, +1, +0), but at that point I lose confidence that the system fits as well as I’d hoped.

When I started working on TinyFate, I thought about running an aspects-only TMNT game. However, with TinyFate there would be nothing to differentiate their weapons and fighting style. Each of the TMNT has a unique weapon, but if there’s no mechanical difference then the narrative differences between them are negligible. This is a very rare situation in which I want to add more crunch to a game…

Finally, when The Three Rocketeers was published, I realised it solved all of these issues. The Three Rocketeers is a World of Adventure that uses Fate’s standard aspects, giving mechanical weight to the characters’ personalities and styles. It doesn’t use traits (skills or approaches, etc.), but it does retain stunts (albeit tweaked slightly to fit without traits to hang them on). In particular, each character has a Swordplay Stunt that confers mechanical benefit based on the character’s fighting style and choice of weapon. This is a perfect fit for TMNT. Didn’t I say that any game that worked for the Musketeers Rocketeers would work for TMNT too?

The Three Rocketeers could without doubt be used for a TMNT game, but I still have a couple of tweaks that I’d use to further emphasise the turtle-ness of it.

First of all, although the conspiracy mechanic from The Three Rocketeers could definitely work for some TMNT organisations (most notably the Foot Clan, the Earth Protection Force, maybe the Utroms/Kraang), in general TMNT thrives on its larger-than-life villains rather than Machiavellian schemers pulling strings in the background. As such, I’d probably do away with conspiracies (unless an ideal story presented itself), and instead I would increase the power levels for major NPCs (while still following the NPC guidance from The Three Rocketeers otherwise).

In particular, I’d follow the advice in Masters of Umdaar, a World of Adventure like The Three Rocketeers, but one that uses FAE’s Approaches to emulate 1980s cartoons such as Thundarr the Barbarian, Thundercats, or He-Man and the Masters of the Universe. Masters of Umdaar suggests using the standard array of Approaches from FAE, but increasing them all by 1 (for Lieutenants) or 2 (for the especially powerful Masters). A character like Shredder, therefore, might have his highest Approach set at Superb (+5), whereas his most significant named henchmen would have their highest Approaches at Great (+4).

In fact, if I wasn’t set on using the four turtles themselves as player characters, Masters of Umdaar would be a great system for a TMNT game. It even has tables for randomly generating mutants, just like the original TMNT licensed RPG. I could easily see it being used for a game featuring the Mighty Mutanimals, or an original group of heroes in the same vein.

One of the main things that makes the TMNT franchise cool is its action. The main characters are ninjas, and use their martial arts prowess to fight off all manner of villains, mooks and monsters.

In order to encourage some healthy action-focussed narration, I would introduce a two-sided game aspect called Ninjutsu action! I previously talked about two-sided aspects in my blog post Cake and free invokes at the Mario Party, but here’s a reminder of how they work.

These free invocations can be used (in the usual way, e.g. to give +2 to a roll) whenever a player incorporates suitable descriptions of martial arts moves into their narration. Each distinct move lets you use an extra free invocation.

At the start of the game (or session or scene, depending on how much prominence you want to give this aspect), the aspects has two free invocations: one that can be used by the player characters, and one that can be use by the villains. Whoever uses their free invocation first will immediately generate a new one, but of course then their opponents will have two to spend. Ideally, the kick-ass narration should escalate slowly over the course of the game (or session or scene), hopefully building to a satisfying climax.

Next time: Leo, Raph, Donnie and Mikey as player characters

Header image is a print by Khary Randolph and Emilio J. Lopez (E-Mann), via deviantArt

5 thoughts on “Fate of the Teenage Mutant Ninja Turtles, Part 1: Introduction to Rocketeering”