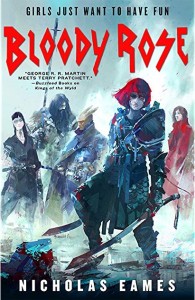 I recently read Bloody Rose by Nicholas Eames, a brilliant fantasy book about a band of misfits who travel around the land killing monsters. It’s exciting and it’s funny (I laughed for whole minutes at one point that I can’t tell you about without spoiling it), and the characters are badass and flawed and relatable. I’d recommend it to anyone with an interest in modern high fantasy literature. For reasons I’ll explain in this blog post, I’m also convinced that it should be added to the next version of D&D’s recommended reading (the 5th edition Appendix E version of which I have previously reviewed on this blog).

Now, I’m pretty sure that Bloody Rose is neither an official Dungeons & Dragons tie-in novel nor set in a D&D campaign world, but it clearly draws on D&D for inspiration. It’s got the standard ingredients: the aforementioned groups of monster slayers; non-human sentient races; magic weapons; a vaguely medieval setting with a map; a stark divide between human civilisation and monstrous wildlands; cataclysmic threats; heroics; bards to sing the tales. It’s even got some monsters straight out of the Monster Manual, including D&D-originals like owlbears, mariliths, and hyena-faced gnolls.

But the thing I’m most fascinated by in Bloody Rose is the spin that it puts on the heroic fantasy genre: what if adventuring parties were like rock & roll bands? It must have been done before, right? Does anyone know where and how? Regardless, I’ve never seen it before, so this is the story that made me wonder how to incorporate that idea back into D&D.

If you want to play a D&D campaign in which the adventuring parties were rock & roll bands, how would that work?

END_OF_DOCUMENT_TOKEN_TO_BE_REPLACED

Describe a game experience that changed how you play.

This example might seem a little shallow, but the Dungeon World campaign that I ran in 2015 was when I really decided that accents are great and that I should use them more often. There’s a rundown of some of the accents I used in that game in my blog post 10 things I learned running Dungeon World (part 1). It wasn’t the first time I had used accents in a game, but I’ve used them regularly since, particularly as a player character. For example: