END_OF_DOCUMENT_TOKEN_TO_BE_REPLACED

Drama dice are a variant advancement and reward mechanic in Cortex Prime, designed by Benj Davis originally as a hack for Smallville RPG. They combine elements from the existing Cortex Prime mods of growth and hero dice and, as the name suggests, they are intended mainly for dramatic games where relationships drive the plot and feelings change over time.

I’ve been aware of Benj’s rules for drama dice for a while (he mentioned them in the comments when I posted my own Smallville hack, for instance), but most recently he explained them in a thread at the Cortex System Roleplaying Google+ community (where there have been a ton of great conversations lately about Cortex stuff, check it out). With Benj’s latest explanation, I had a few realisations:

So, without further ado, how could you incorporate drama dice into your own dramatic Cortex Prime campaigns?

END_OF_DOCUMENT_TOKEN_TO_BE_REPLACED

This month is the 32nd since I started this blog. It is also, by a weird coincidence, the month of my 32nd birthday. I realised this too late to turn RPGaDay into “31 posts in month 31 while 31”, but nevertheless I’m feeling a bit reflective.

Here is a look back at some of my most popular blog posts, the top 11 posts on the blog based on average views per month (vpm) since publication.

There are a lot of Teenage Mutant Ninja Turtles in this list. You’ve been warned.

END_OF_DOCUMENT_TOKEN_TO_BE_REPLACED

Which RPGs are the easiest for you to run?

The RPGs that are easiest for me to run are the ones in which the players do all the hard work, particularly in being proactive and developing conflicts between each other instead of waiting for me to provide a problem for them to solve. For example, Smallville is a dramatically driven game in which, during a session, I could often sit back and just watch things unfold. The problem with Smallville, however, is that there was so much preparation needed at the start of the campaign (preparing NPCs and so on), and so much bookkeeping needed between sessions. That’s a significant barrier to me running it again.

Psi*Run is a game that also takes a lot of player input throughout and, being designed mostly for one-off sessions, has no prep work or bookkeeping to speak of. On balance, I think Psi*Run is the easiest RPG to run, although I wouldn’t be comfortable using it for a campaign.

What was your most impactful RPG session?

That’s a tough question. I’m really not sure. I’ve had a few campaign sessions that were meaningful to me, or to the group, or had long-term influence over the campaign. I could name a dozen incidents just from my various Unknown Armies campaigns, for instance, but I talked about them on Day 4.

Instead I’m going to go with one of the most cathartic sessions of the X-Men-themed Smallville campaign that I ran, the one set in a Hogwarts-style British boarding school where the students and teachers are all based on reinterpretations of canon X-Men characters.

Jason (PC, student, based on Mastermind) has just been freed of some empathic mind control that stopped him from feeling anger. Rather than lash out, the release in tension makes him super relaxed. His illusion powers go out of control, and he turns the entire school into a tropical beach at night. What’s more, the illusion has a mental component, so that everyone feels a-ok with being on a beach and stops worrying about anything.

Rogue (PC, student, based on Rogue), who is troubled for several reasons that I won’t go into, is finally able to reconnect with both her mother Erin (NPC, headmistress, based on Magneto) and her childhood friend/crush Piotr (PC, student, based on Colossus). Piotr’s sister Illyana (PC, student, based on Magik) was able to be around other students in a non-confrontational atmosphere for the first time since she disappeared into a dream dimension, aged 5 years in a day, and became part demonic. Alas, Illyana’s newfound peace did not last, as an accident made her display her demonic features and terrify the other students, making her teleport away all the way to Russia.

That’s just giving an impression of the main character arcs in the session. I’m honestly not even scratching the surface of what happened, or the context behind it. Smallville is a weird, cool game.

Declaring that a game is “good” (or, worse, “bad”) is almost always a controversial prospect. In general, I prefer to say that I have liked or disliked a game rather than claim that it has an absolute or objective quality. “Good” is a subjective distinction, and opinion will vary from player to player.

That said, I feel pretty confident in defining what a good game is, as long as the definition itself leaves room for subjectivity.

END_OF_DOCUMENT_TOKEN_TO_BE_REPLACED 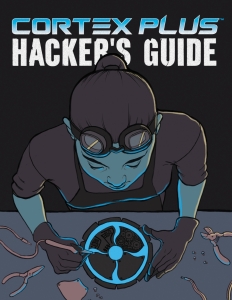 Last week, it was announced that Cam Banks has licensed Cortex Plus from Margaret Weis Productions. Cam co-created the Cortex Plus system, and he was co- or lead designer on three out of the four main games published using that system, not to mention the driving force behind the excellent Cortex Plus Hacker’s Guide. He knows Cortex Plus inside out and he can do wonderful things with it.

I’m looking forward to seeing what his new design studio Magic Vacuum comes out with! I’ve no doubt that soon there will be new versions of Cortex Plus Action (used for Leverage and Firefly) and Cortex Plus Heroic (used for Marvel Heroic Roleplaying), which will make many fans of the system happy.

But my favourite is Cortex Plus Dramatic Roleplaying, which was spun out of the Smallville Roleplaying Game. It’s the only one of the three that gives me something I can’t currently get from any other RPG. I love it, but it has flaws. It could use a new edition.

Here’s what I would want to be updated, changed, clarified or kept in a new edition of Cortex Plus Dramatic Roleplaying.

END_OF_DOCUMENT_TOKEN_TO_BE_REPLACED

One of the best parts of the Smallville RPG is its character creation system, Pathways. Pathways is a lot of fun, and it lets players collaborate to produce an entangled web of characters for the game to come.

Players do Pathways by following the instructions on the Pathways Chart. The chart is an incredible piece of roleplaying design. You start at the top, and each row is a stage of the character’s life journey. At each stage, players choose options for their character, and those options list Traits that go on the character sheet.

Sometimes, however, the default Pathways Chart is not the right tool for the game you want to run. If the gaming group has an idea for a campaign that isn’t Smallville, but is more specific than a generic Superpowered Teen Soap Opera, going through the default Pathways Chart may be too long or too confusing, especially if the players haven’t played Smallville before. That was the case for my Worthington Academy game (in which the player characters are alternate versions of the X-Men in a British, Hogwarts-style boarding school).

Here, I present an X-Men-themed Pathways Chart that anyone can use for their own games. It should hopefully facilitate a game based on that setting, and provide a shallower learning curve for new players. Enjoy! Let me know what you think!

END_OF_DOCUMENT_TOKEN_TO_BE_REPLACED

One of the great joys of playing roleplaying games, especially playing a single character through a long campaign, is in seeing your character grow and change. In traditional high fantasy games, it’s fun to rise from humble beginnings to be an important and powerful figure in the campaign world.

Character advancement is not the same thing as character development.

END_OF_DOCUMENT_TOKEN_TO_BE_REPLACED

My Tweets
Step into RPGs
Blog at WordPress.com.
Loading Comments...